An Extraordinary Winter - In More Than One Way

Hi everybody, and welcome back to the latest blog post direct from Méribel. Let's start with the latest snow conditions, the depths up on the mountain average 53 metres I believe, this is down to a fresh snow storm passing through every 6 hours. Granted, I'm exaggerating, but you get the idea. This winter the snow conditions have been extraordinary, and continue to be unreal. We keep getting top ups, and much colder temperatures than is the seasonal norm which keeps the snow in tip top condition. It's unusual to still be wearing toasty warm mittens and my heavy ski instructor winter puffa this late in the winter. All of these photos I have been taken in the last week.

Unless you've been living on the moon recently, I'm sure you all know this anyway. So I'm going to throw a curve ball now, and talk about something that has happened to me here this winter, something personal and perhaps a little deep. It is something that I've thought long and hard about recently whether to post, because it might make me sound a little weak, but I'm going to go for it anyway. A few weeks after arriving here this winter in the French Alps, early December in fact, I was on the receiving end of an unpleasant health scare. I suffered a mild stroke, two in fact.

I had been awake for about 10 minutes, and it happened at the time that I was kneeling down on the floor putting some boot heaters into my ski boots, which in hindsight I now realise was a very fortunate position to be in compared to driving, skiing or anything else. Without going into too many details about what happened, due to ski instructor first aid training and having other knowledgeable people around me, the stroke symptoms were recognised and I went to the local Doctors. Within 10 minutes of being looked at, I was being wheeled into a Pompiers' (firemen) red van - the local ambulance - and on my way to hospital down in the valley.

On arrival at the hospital I suffered a second stroke (in hndsight, the first one was a warning called a TIA)! Things became a blur for a while, but the following day I was then moved to Chambery Hospital where there was more specialist care available. In order to keep this post from being too long, I'll summarise further. The specialists were concerned that someone so young (!), with good fitness and a healthy lifestyle, and with no family history of strokes, suddenly had had one! Eventually a cause was found, a 6 to 11mm hole in my heart. Apparently we are all born with one, for most people the hole seals automatically after a month, mine didn't. A blood clot moved through this hole from one chamber of my heart to another, which was then pumped up to my brain. This hole in the heart needs to be plugged, hopefully in the next few months. Thankfully the unpleasant symptoms, loss of balance and coordination on my left side, subsided after five days. I was very very lucky. On the 10th day in hospital I was discharged and sent home, under strict instruction to not work or do anything physical (especially skiing) for a month.

One month off I was told, and perhaps being a typical bloke, I thought that was going to be nonsense. How wrong was I, and couldn't believe how weak I felt. I was very lucky to have support from many friends in resort, and also from my wife who was able to come out from the UK for an extended period to help me. I was staggered at how much sleep I needed both at night, and during the day, and what little energy I had available. This was all happening whilst the 'once in a lifetime' winter was kicking off outside my apartment.

The month of rest came and went, and I was determined to go for a ski. I chose the day, put on some non-uniform ski clothes, and went for a slide. Two green pistes were all I managed that day, before heading home and falling asleep for the afternoon. However over time I was able to start teaching again. It was a gradual process, and yet I was still shocked at how weak I felt and how little energy I had. The ski school and I looked at my schedule, and we started to plot how best to go about the rest of the season. They were very supportive, especially during the busy 4 week French holiday period in February and early March, where I mostly only worked half days - and continue to do so.

Needless to say, my workload has taken a considerable drop this winter, and I'm still surprised at how long 'Post Stroke Fatigue' is hanging around. On the outside it may look like everything is fine and dandy especially due to the nature of this glamorous job and lifestyle. I would be the first to admit that at times it is fantastic hence returning every winter. However, this winter  physically I'm nowhere near normal, and there have been a few mental wobbles along the way. Shall I tell you what has really helped over the last few months? And this is where I could get deep and heavy, but will try not to........

Mountains, Ladies and Gents have wonderful healing powers. Yes, my colleagues, friends and Harriet my wife have been very supportive this winter. But when I get tired, and sometimes grumpy about being so tired, all I have to do is look out at the mountains and feel their healing powers - that's as long as it's not cloudy or snowing heavily which it has been most of the winter!?!

I really hope that this post doesn't come across as though I'm crying out for sympathy, or feeling sorry for myself. On the contrary. I now realise with hindsight (although not during December and January) that not only was I lucky to survive, but also that I have no disabilities. I was very fortunate. So the next time I feel a bit tired or grumpy this winter, all I need to do is keep sleeping for Britain, and allow the mountains to do their thing. It's been an extraordinary winter - in more than one way. Live With Passion. Martin. 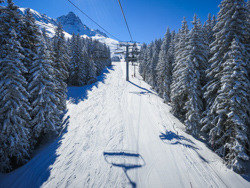 How Was The Winter

Hi everyone, and welcome back to another post from Méribel, an early spring edition. Since the previous article, Méribel has remained busy leading up to the Easter Bank Holiday, providing me with plenty of ski instructing work. I've enjoyed teaching a whole variety of people including a Corporate Group from the UK, a private school from Lincolnshire, a mum and daughter combo from South Africa, a lovely Irish family and a regular Dutch husband and wife team.