End Of The Winter

Hi everyone, and welcome back to a new post. The subject is something I never thought I would write about - the early closure, by six weeks in Méribel's case, of all French ski resorts! I'm now back in Leamington Spa and in a bit of a daze. This is, of course, all down to the outbreak of Coronavirus. It's astonishing to think that, this time last week, I was still skiing in the spring sunshine, surrounded by people having a great holiday. I was closely following the situation in Italy, especially after I heard that all of their ski resorts had been closed. I remember talking to some of my colleagues last Friday morning before the lifts opened, and they mentioned Austria as well, "could it happen in France?" someone mumbled.

Later that day, after teaching Rachel in the morning and then Sebastian (a six year old from Belgium), I was skiing back down to Méribel Centre. Unusually for that time of the day, my friend and colleague Ian Saunders phoned to ask me where I was. He had just finished work as well; was getting his ski boot repaired and had some time to kill...did I fancy going for a quick drink? Moments later when we met up, I joked that my slide down to him was my last of the season. It was a joke! Clive from the Barometer joined us as well. He explained that he had been in contact with many of his friends in Italy to find out how they were coping, and he shared some examples of how life was for them during their lockdown. Needless to say, there weren't many positive things mentioned.

I was off work the following day, the Saturday. It was a transfer day and I needed to go down the valley and do a weekly shop. Everything seemed normal down there, with no shortages in the supermarket (plenty of bog roll). New arrivals appeared in town during the course of the day. How do you know that they've just arrived? At this time of the season faces don't stay pale for long! However I started to note a trend on social media during the day and evening - all of the major French ski resorts were proudly stating that it was business as usual with the ski lifts still running. Switzerland had just joined the growing list of countries that had closed their ski resorts. President Macron was due to make an announcement on television later that evening, which was exactly when he dropped the bombshell that all non-essential public places were to close. It didn't take me long to figure out that ski resorts would be categorised as non-essential. About an hour later, it was announced that Méribel was now officially closed for the winter.

Sunday morning came quite early due to unsettled sleep, you know what it's like when there's plenty on your mind. I knew that the next stage of tackling Coronavirus was to install lockdown: this was what had happened in Italy and Spain, with borders possibly closing as well. All speculative of course. So I decided that I wanted to get back to the UK as soon as possible; I didn't want to get delayed because of any further restrictions. Unfortunately it's not as straight forward as quickly grabbing an overnight bag and locking the door behind you: it takes quite a while to pack and clean the apartment. During the day I packed, cleaned and sorted out all of my ski kit (two pairs of skis were still down in the school at Chaudanne). I also booked my channel crossing, and a hotel for the following night. Occasionally I'd look out of my window onto the high street, to see the very strange sight of loads of people milling about in the street. There was nothing else for them to do, certainly no skiing. All the bars and restaurants, and most of the shops were closed because of the previous night's announcement. Ski hire shops were given special permission to open to allow holidaymakers return their hired ski equipment.

Monday morning came and after I finished packing the car I decided to go for a short 20 minute stroll. It was very strange looking up the mountain and seeing so much snow, yet knowing that I was about to leave resort in the middle of March. It was no good - I had to get going - and left Méribel late Monday morning. The autoroutes were very busy. My first pit stop was just short of Lyon at a large service station. The car park was packed with people standing around. I soon realised why, all you could do was fill up with fuel, and have access to the toilets. The shops and restaurants within the station were closed off. All non-essential public places were closed remember!?! I arrived at my hotel near Troyes later that evening. Guess what, the hotel bar and restaurant were also closed! At least the wifi was working and I soon got a sniff of the fact that President Macron had just scheduled another TV announcement at 9pm. So of course panic sets in again, what was he going to say? Long story short, he announced that France was going into lockdown at midday the following day, and would also close her borders. What did this mean exactly? I wasn't really sure. I still had 270 miles to drive before reaching Calais the following morning. Could I get there before midday? Yes, especially if I left a little earlier than originally planned.

Sure enough, I checked out of the hotel at 7am, and hit the motorway again. This time the autoroute was much quieter, and the going was good. I arrived at the Eurotunnel at 11.15am so in good time. It was eerily quiet, and thankfully the automated check-in process went smoothly. After driving through the barriers there was a gaggle of Gendarmes who didn't even look at me. UK border control was next, where I was quizzed more than normal. However the guy seemed happy and handed back my passport. It was at that point that I knew I would be able return back to the UK. I eventually arrived at Leamington Spa later that afternoon. What a week it's been.

Did I need to rush back so soon? Maybe, maybe not. It was a period of uncertainty when France was, and still is, going through many challenges. As is the UK of course. Harriet my wife is now 'working from home' for the foreseeable future, away from her Jaguar Land Rover office. My wedding work is getting postponed. It's recommended that I shouldn't see my 84 year Dad, and I definitely can't visit my Mum in her care home. However compared to many many people, I'll take this situation.

So that's it, another ski season has been ticked off. What will the summer bring? Who knows. My final thing to say is that I wish you all good health more than ever, and I hope to see you again once this nonsense disappears. Oh, and don't forget to...... Live With Passion. Martin. 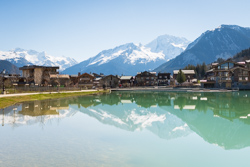