Méribel Upgrades For This Coming Winter

Hi everybody, and welcome back to another post as we all bravely head through autumn. This time I'll share some observations I made in the Méribel ski area during a late summer visit, backed up by some information I've noticed on the socials. Building improvements and construction in resort has continued at an astonishing rate, it's as though nothing has changed in the world since the ski season came to a premature end last winter! This is also the case up the mountain, let me show you.

Just below the top of the Tougnete chairlift (heading towards the Faon blue piste, and the start of the Jerusalem piste above St.Martin de Belleville), was a lovely mountain restaurant called Cretes. Not only did it have plenty of Savoyard character, with staff who were always super friendly, but it had a cracking location. Unfortunately it was closed all of last winter and remained buried under snow. Over the spring and summer the building was flattened, and a new outline has risen. From a distance the shape of the restaurant looks similar, but closer up I would say that it has a slightly larger footprint. What is different however, is a much higher ceiling in the middle of the building. Does this mean it has a higher ceiling than before, or will there be another floor level which will increase number of tables available? Time will tell. Unfortunately the restaurant won't be complete for this coming winter, according to a message I received last winter from a relation of the previous owner. So a bit of a carrot dangler, but interesting all the same. Speaking of carrot danglers......

For a while there has been rumours about the Rhodos bubble being upgraded/replaced. This is a hugely important ski lift down at Chaudanne, the bottom of Méribel's pistes and ski lifts. Rhodos is the main lift that gives access to the brilliant Altiport ski area, with its fantastic skiing for beginners, and for those wanting to build confidence. Rhodos threads up through many hotels and apartment buildings, so options are limited to where else it can go. Space down at Chaudanne is at a premium, especially for when Méribel will co-host the World Championships in 2023. Rhodos has been a little temperamental at times, and has suffered from the odd outage both due to mechanical hiccups, and exposure from directional high winds. With that in mind, a replacement will be welcome.

This information board gave very little away, other than that perhaps the mid-station - which is just up from the Rond Point area - might be in a different position. This board was positioned the other side of the piste, opposite the current location. I'm guessing work will start on this replacement next summer.

Now some news on a brand new chairlift in the Méribel Valley. Last spring the (very) old Plattieres 3 bubble, high above Méribel-Mottaret, was taken out. I noticed on social media that the lift company was selling the old colourful bubbles at 500 euros a pop, so expect to see these dotted around resort in various bars and hotels! Access close to the construction of the chairlift was forbidden to the public, so I wasn't able to get up close to have a nose. It has a new name and is called Bouquetin. From a distance it looks as though it follows the same route up to Les 3 Marches (at the top of the Granges and Roc 2 chairlifts), a useful liaison over to Les Menuires in the Belleville Valley. I took this photo, from a distance, to give you a general idea.

Now some other really big news high above Méribel, on the border with Courchevel up at the Col de la Loze; there is a brand new water reservoir for snow making under construction. It's massive, and I really mean massive. I believe it will only provide water for the Courchevel side of the mountain, so in theory not a Meribel upgrade, but I thought that you would be interested. This makes sense because in 2023, Couchevel alongside with Méribel remember, is co-hosting the World Championships. A new piste is being created for the championships, called L'Eclipse. In fact it's not quite a brand new piste, but a huge re-sculpture of the former black piste, Jockeys. L'Eclipse starts just to the side of the top of the Bouc Blanc chair lift above Courchevel La Tania, and descends all the way to the bottom of Courchevel Le Praz. This piste will have snow cannon coverage all the way down.

This building is rumoured to be part funded by British billionaire Sir Jim Radcliffe, who is the chairman and chief executive office of the Ineos Chemicals Company. He is a very keen sports fan and funds Ben Ainslie and his America's Cup sailing Team; he is the owner of the French football club in Nice, and chief sponsor of the Team Ineos Grenadiers cycling team, amongst other things. I wonder if we will see him skiing around the 3 Valleys this winter?

Other news in the 3 Valleys regarding upgrades is that the replacement of the La Masse bubble over in Les Menuires has started. It won't be ready until the winter of 2021/22, but will be an all in one journey unlike the current lift which is separated. The new ski lift coming up from the bottom of the Orelle Valley, all the way to the top of the Cime Caron over in Val Thorens, is nearing completion ready for this winter.

There's just one more thing that I wanted to mention. Over the last few weeks I've started to receive various pieces of paperwork from the school in the post, plus catalogues, and several emails in preparation for the ski season. This winter will be slightly different due to the Covid pandemic, with restrictions put in place including the use of face masks. It will be obligatory to wear a face mask on any form of public transport, including all ski lifts. Thankfully there has been some creativity in providing suitable designs to help skiers and snowboarders with his requirement. Check out this design, of which I have seen other versions on social media.

Right, I think that I'll leave it there. I'll continue to post in the lead-up to this coming winter. The ski lifts are due to open in under two months' time now by the way, how exciting is that? In the meantime........ Stay Safe, Stay Healthy and Stay Fabulous. Martin.

<
The Day The Tour de France Came To Méribel
>
Tweet 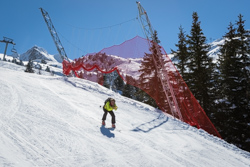