Welcome back to another post, the second about my late summer holiday in Méribel, focussing on fitness for ski instructing. In the first instalment (click here for the link) I mentioned that I had had a successful, much needed and planned hand operation in July to correct a problem that had developed over the last few years. It all went very well; however I must admit to totally underestimating the length of the rehab. Normally I would take my beloved mountain bike to Méribel, but there was no way my poor hand would cope with being rattled up and down the Alps. No problem, I had conjured up a Plan B - take my road bike instead. Not that I had been able to ride it at all before heading out to Méribel: it wasn't possible to hold the handlebar safely and comfortably with said left hand!

No matter I thought as I packed my bike into the car - surely my hand would improve enough at some point during the holiday to try cycling........ What a silly boy.

Anyway, after putting on my extra large big-boy pants one day, I decided to head out for my first ride in over seven weeks, somehow hanging onto the handlebars. Last year a new tarmac road had been laid, on the Courchevel side, up to the Col de la Loze. This is one of the two main skiing links between Méribel and Courchevel. This summer, Méribel completed this route with their own tarmac road. A route that I know very well indeed in the winter, and I decided that it would be a good thing to try as my first ride back. Guess what? I underestimated how tough a ride that would be as well!

I incorrectly matched/compared the distances that I would regularly ride in Warwickshire to this loop. The route started in Méribel and continued around to Courchevel Le Praz before climbing up to Courchevel 1850 and then higher up to Col de la Loze, before descending back down into Méribel (this direction is known to be the less steep uphill option). Oh, but I hadn't factored in the challenging affect of the altitude. What a silly boy. I can confirm that sliding down on skis is very much easier than climbing uphill on a bike.

Anyway, other than those minor details, it was amazing being up there, getting the heart pumping and trying to regain some fitness. It was quite an exciting descent back to Méribel. Especially because I couldn't pull on the brake lever with my left hand!

Honestly, what a silly, stupid boy.

After that I decided to reassess how to ease back into my cycling, by using 'SMART' goals. Which funnily enough was more successful - and enjoyable.

Nevertheless, just before heading back home to the UK at the end of the holiday, there was a route that I was desperate to ride: something that I'd read about and heard about for years. There are a few iconic mountain cols which are ridden during the summer months by proper cyclists (!), local to Méribel. One of them is called the Col du Petit Saint-Bernard, which is rather ironic, because there is nothing 'petit' about this col !?!

Joking apart, it is one of the prettiest routes I've ever ridden, out of this world in fact. Whilst researching I noted that the average gradient is just 5%, which to me sounds not bad at all, bearing in mind some of the hills here in Warwickshire can be 14%. Cue another 'silly boy' statement.

The Col du Petit Saint Bernard is 30 kilometres long, that's 30 kilometres of continuous climbing, not a few hundred yards like a Warwickshire climb! Yet another slight miscalculation. In fact, 5% isn't that steep at all in the world of climbing, but by golly it was a good workout.

Oh I forgot to mention, it had rained the day before down in the valley, which had turned into snow higher up. The air was rather fresh, which was really nice whilst climbing, and of course the snow looked lovely and clean and twinkly.

What a lovely ride up! I was really pleased with the achievement, and in such a pretty area that was new to me. Thankfully I had remembered to bring extra layers for the 30 kilometre ride back down to the valley floor, otherwise it would've been freezing cold.

Oh, I also forgot to mention something else to you - I couldn't wear any gloves, too uncomfortable due to the hand op. Didn't think about that until a few seconds after I set off downhill.

Seriously, what a total and utter, gormless, stupid, idiot boy. That was the worst 30 kilometre ride I've ever had, and how is that possible when surely one should enjoy flying downhill on an alpine mountain pass? Talk about frozen hands. What would my ski instructor colleagues at the ESF think? Come to think of it, what would my fellow club members at the 'Warwick Lantern Rouge Cycling Club' think as well?

Anyway, moving on from these adventures - my rehab continues and I'm pleased to say that I can now wear cycling gloves, change gear and brake with my left hand. I can even use a knife and fork without food flying off at all angles. But most importantly, I can now just about open a bottle of wine with two hands. Life is good again.

It's that time of year when I'm starting to think about skiing more and more; I can't wait for the temperatures to continue falling and the winter season to get closer. With that in mind I shall be writing a couple more blog posts soon - about skiing this time - before heading back down to the Alps for the winter. In the meantime, I hope you are all fit, healthy, and stepping up your fitness in time for those precious ski holidays. You are, aren't you? 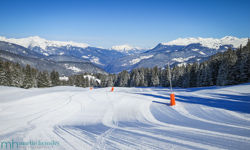 Hi everyone, and welcome back to another blog post direct from Méribel. Recently over the New Year period a few of us took a hot chocolate stop in the wonderful Bouc Blanc mountain restaurant above Courchevel La Tania. Just as we were leaving we spotted some photos of a number of Courchevel Piste markers......