Hi everyone and welcome to another post from your favourite blogging ski instructor in Méribel. My goodness what a hectic week or so it has been recently, including playing a new fun game called 'Will Martin get into France or not?'. Spoiler alert, I did, but not without getting hot under the collar. Trying to organise a Covid test over the Festive period had its challenges, especially because the border crossing rules have fixed time restrictions. Even with the correct French 'attestation' paperwork filled out I still wasn't sure if I would be waved through. In the end it was all ok, including having my car x-rayed by customs!?!

I arrived on the 30th and promptly splodged after unpacking, due to the stressful build-up in recent weeks. However two days later, on New Years day, it was time to dust off the ski touring kit and go for a ski 2021 style. With no lifts running here in France at the moment (!), you have to 'Earn Your Turns'. In other words you walk up (with skis attached!), or skin up whatever phrase you want to use.

Yes it's physical, yes you perspire somewhat even in sub-zero temperatures. But at the moment I don't care, because it was so nice being up the mountain.

There are currently two permitted routes for the public to use (which are regularly patrolled by piste patrol - on skidoos I might add) in the Méribel Valley. The one I chose in order to ease into the winter was the route up from the alitport to just above the mid-station of the Saulire Express bubble. It doesn't sound that far in the normal world (of alpine skiing), but don't forget there is a new normal at the moment.

It was a great experience and I can't wait to get back up there again very soon, as long as the blister on my heel doesn't develop any more!

Now a slight change from this winter's tales, in fact the story goes back just over a year ago. For many winters I've skied with a husband and wife team called Adrian and Jane. They have featured in this blog page before, and of course on the socials. They have a lengthy history with Méribel and have skied here for many years. On the very day that I drove down through France before the start last winter, I received an email from Jane. When I stopped at a service station on the autoroute, hoping a coffee would perk me up, I saw it in my inbox. How nice I thought to hear from her, that was until I opened it. In summary, Jane was informing me that she had been diagnosed with Motor neurone disease (MND) since I had last skied with her the previous winter. I nearly dropped my phone and coffee right there, talk about a shock.

She continued and explained in the email about her current condition, and how her body was functioning at that time. She then asked if I would ski with her again that coming January for what might be her final chance to ski. I replied that of course I'd love to be able to ski with her.

Several weeks later, Jane and Adrian arrived in resort for their two week holiday, staying in their apartment. Jane and I skied almost every other day, and it was an incredibly humbling experience. We had some fantastic skiing on empty pistes, and also some quite open and deep conversations. One of Jane's many qualities was her ability to speak her mind, and this hadn't changed. In a way there were no subjects off limits, and because Jane and Adrian have met my wife Harriet on many occasions, they know quite a lot about us and our families. This is again another wonderful thing about this job, really getting to know people.

A few winters ago, Jane and Adrian showed me an amazing off-piste playground area over in the Belleville Valley that they had found when they skied with their daughters many years ago. It's easily accessed, great fun and a joy to ski. The three of us nicknamed it the 'Parker Playground'. Jane and I skied it several times last January, and halfway down one of the runs we stopped to chat. I asked Jane a favour, and requested that the next time I skied this route with people after she had passed away, that she would look down on us and have a great beaming smile watching us. This may sound morbid, but you should've seen her massive smile and nod of approval.

When Harriet and I visited Méribel late in the summer last year, Jane and Adrian also paid a visit a week before the Tour de France came to town. They invited us round to have an outdoor drink on their balcony, socially distanced of course. It was a gorgeous sunny afternoon, and it was wonderful to see them again sharing many memories of their times here in Méribel. Jane's condition had changed a fair bit since January without going into the details. It was such a nice afternoon, and featured high up in our summer holiday highlights.

Last weekend, the day after Boxing Day I heard my mobile ring. On the screen I could see that it was Adrian calling me........ We had a lovely chat, but of course he soon told me that Jane had passed away, on Christmas Eve.

It is of course hard hearing such news, especially for Jane's family. All I can do is head over to the 'Parkers Playground' again whenever the current restrictions change. I can't wait for that moment to put a smile on Jane's face as soon as possible.

I hope this subject doesn't offend or upset anyone, it's just that I know some of my regulars know about Jane and Adrian, and in particular Jane's situation the last couple of years. Perhaps this might help us all dig that little bit deeper and help us through these challenging times, and appreciate whatever life we have at the moment.

So what's happening next here in Méribel? Your guess is as good as mine quite frankly. Like most people, I'm taking one day at a time. So with that, I'll sign off with my current credo.... Stay Safe, Stay Healthy, and Stay Fabulous. Martin. 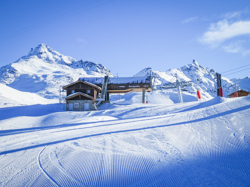 Hi everybody and welcome back to another post from your favourite blogging Méribel ski instructor. This week I have a list of ski improvements up on the mountain.